Dr. Mark Wilson is the founder and director of the Asia Minor Research Center in Antalya, Turkey, a country in which he and his wife Dindy have lived since 2004. The purpose of the AMRC is to promote the study of early Judaism and Christianity in Asia Minor. He received an M.A. in Biblical Studies at Regent University and a D.Litt. et Phil. from the University of South Africa (Pretoria) where he serves as a Research Fellow in Biblical Archaeology. He is an Associate Professor Extraordinary of New Testament at Stellenbosch University and Adjunct Lecturer in New Testament at Ridley College, Melbourne. Wilson regularly leads study trips to the biblical sites in Turkey, Greece, Italy, and Cyprus. He is the author and editor of numerous books, articles, and 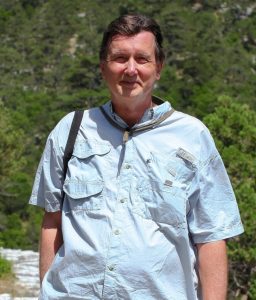 reviews including a commentary on Revelation (Zondervan), Charts of the Book of Revelation (Kregel), and Biblical Turkey: A Guide to the Jewish and Christian Sites of Asia Minor (Ege Yayınları). Recent projects include writing the “Acts” and “Revelation” sections for the forthcoming ESV Archaeology Bible and participating in two documentary videos, “Exploring Ephesus” and “Saint Nicholas, The Real Story.” He also serves as the English editor of the Turkish archaeological journals Adalya and Anmed. Wilson is a member of twelve academic societies including the Society of Biblical Literature, the Institute of Biblical Research, and the American Schools of Oriental Research. His particular research interest is the ancient Jewish communities, Roman roads, and biblical routes in Turkey. Mark has been married to Dindy for forty-two years; they have four adult children, four grandsons, and four granddaughters.